Learned something new and important if ever this happens to you.

I was taking a naproxen for a head ache and the pill drops on the floor, dog eats pill!

Naproxen is similar to ibuprofen but is longer-acting; it is the active ingredient in medications like Aleve and Naprosyn. Ibuprofen and naproxen are widely used to treat pain, fever, and inflammation in people. Unfortunately, these drugs can be extremely toxic (poisonous) to cats and dogs.

So we try to get the dog to throw up and were told to use hydrogen peroxide, does not work. Get her to the vet 10 minutes from the house, she gives her a shot and does the trick. We also had to give her IV fluids for 3 days to flush her kidneys. We caught it fast enough that she came out of this fine.

But! I gave Activated Charcoal to her the following day as Naproxen recycles for 72 hours! Even better if you can give it right away.

A good thing I keep on hand now, because you just never ever think it will happen. Activated charcoal is an effective adsorbent of many toxins and can significantly decrease the amount of toxin released into the bloodstream. Activated charcoal is most effective when administered within an hour of exposure to toxins. Treatment with activated charcoal is permanent, as once the toxin is bound to the charcoal it does not get released. Alternate treatment in the case of toxin ingestion include gastric emptying/lavage, cathartics, and dilution with milk or water in combination with a stomach coating agent. These alternative treatments may be used alone or in combination with activated charcoal. The efficacy of the other treatments depends on the toxin that you are trying to treat. For example, gastric emptying (via inducing vomiting) would be counter indicated in the case of a corrosive toxin due to the damage of the esophagus that would occur. Read more at: https://wagwalking.com/treatment/activated-charcoal

I used to love summer!

So our litter of one came via C-Section as I had a feeling it would. Mandy had a beautiful baby sab 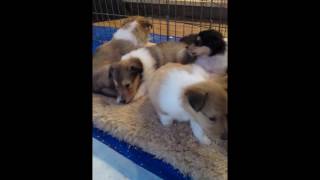